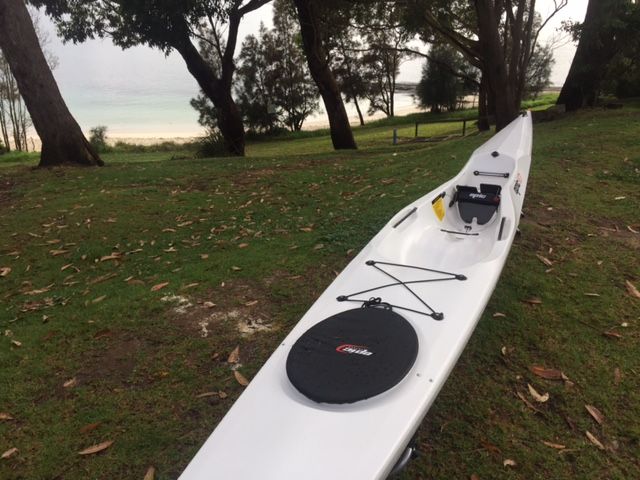 The new entrant into the ski market hit the stores earlier this year with Epic releasing their new roto moulded V7. Epic have positioned this as a more durable and significantly cheaper version of the hugely popular V8 entry level ski and believe that its performance and durability make it a game changer in the entry ski market.

We have added a demo of the V7 to the JBK fleet and have been putting it through its paces this week.

The finish and outfitting

I think for a roto moulded plastic construction, the ski presents really well. The finish is never going to live up to a composite boat but given the V7 is around $1,200 cheaper than its composite cousin, I think any paddler would be pleased with the finish and hull quality for this price point. Epic have also included the full suite of light weight features in the package usually available for their composite skis. These include carbon rudder and side handles, pedals and foot plate – heavy duty handles at stern and bow, adjustable bailer and bungee cord for storage.

This is the first ski in the Epic stable with a hatch. Included is a light weight hatch cover with draw string mechanism. I know that there have been some questions about the hatch cover and its ability to withstand surf, albeit on my test paddle this was not an issue.

I spent a bit of time in the surf where I got swamped and also did a heap of self-rescues where the ski was upside down on the water. At the end of the session there was not a drop of water inside – I think the key is to tighten the draw string as much as possible and ensure the jam cleat is firm. If I was going in bigger surf I would definitely put some flotation bags inside the mould to prevent the hatch cover blowing off and to add buoyancy in case it did.

It would be good if there was a tie down point within the hatch to stop dry bags from sliding around. That aside, the ski becomes a more diverse cruising craft with the ability to take a bit of gear for a full day touring paddle. This adds an extra element to traditional ski paddling, so in all I think it’s a good inclusion.

For $240 there is an option for a stern mounted flip up rudder which would make beach landings and the general handling of the ski out of the water a lot easier. So this is another nice option for the paddler who is looking for an all-round cruiser.

The hull is fairly stiff for a roto moulded plastic boat and Epic believe that it is extremely durable and can handle surf, beach landings and being dragged around as plastic boats tend to be (watch out for the rudder though, as its still carbon so does not like to be dragged around in the slightest).

Handling off the Water

The V7 is around 22kgs. While its 5kg heavier than the V8, the convenient side handles and relatively short length make it quite manageable out of the water and I was able to load it on the Prado straight off my shoulder (with a bit of grunt and occasional swearing). Compared to a 5.2m plastic sea kayak, 22kg is still very light. However If weight is a key consideration, kick in for a composite ski and enjoy the pleasure of throwing around somewhere between 12.5 and 17.5 kg.

Performance and Handling on the Water

The V7 is based on the V8 composite shape. The deck, bucket and cockpit feel similar. It is around 30cm shorter and 1.5cm narrower. Don’t let the narrower beam fool you though – like the V8, this ski is extremely stable. I was able to hold the edge of the ski to the point where water was flooding the cockpit and even push passed this point before a brace was needed. The primary stability is a little loose at first (which I consider a good thing) but once the ski is leaned a little on the edge, the secondary stability kicks in and is rock solid – it’s actually quite hard to tip it right over. I was able to easily sit in the bucket with legs over the side and relax without any risk of capsize. These features make capsize re-entry a breeze.

Given the nice edge control and relatively short length, this ski is very maneuverable. Compared to the V10 Sport which I often paddle, the maneuverability of a V7 or V8 is in another ball park. In fact, even without using the rudder at all, employing the sea kayaking technique of leaning it on its edge and paddling forward instantaneously threw the ski into a nice turn. Despite this, tracking on flat water was strong. In the surf this tendency to turn on the edge can be a double edged sword but I really enjoyed the ease of managing the ski in the break zone and navigating the (very small) waves present at the Husky spit on this particular morning.

In terms of speed – well I am not a noted speedster however it seemed to hit that easy cruising speed of around 10km/hr without too much trouble and with a bit of extra effort I could nudge 11. It does take a bit of effort to get the ski moving – and this is where the extra weight and less stiff hull construction really come through. The ski definitely feels heavier in the water. Once it’s going however, it feels good, can pick up runners well and can be used for fitness paddling just like the composite skis. Comparing this to the longer V8 – while the stability is very similar, the stiffer composite hull and extra length combine to make the composite ski faster on the water compared to the V7.

I found the ski a really good all round package. For those that are purely focused on speed, acceleration, and weight, then buy a composite ski. However for the paddler that is looking for a tough craft with versatility, a cruise one day and fitness paddle the next – this is a great choice. I would see this fitting in very well with sea kayakers looking to broaden their skill base and to poke a toe into the world of ski paddling. My personal experience with ski paddling was that it did wonders for my sea kayaking skills – the focus on core strength, balance and forward stroke technique gave me a huge confidence boost in rough water sea kayaking. On the other hand, novice paddlers just looking at an all-round cruiser or to work on a bit of general fitness would get good use out of the V7, particularly when they can drag it up on the beach and take some lunch out of the hatch. At around $2,000 this hits a good price point. With the safety of a sit on top kayak, the performance features of a full on ocean ski and a price point that is significantly below composite models, I think this is a great addition to the Epic stable and should see more paddlers getting into the sport.

We have demos of the V7 and the V10 Sport at JBK and are happy to arrange a one on one test paddle all year round. For any paddlers that buy an Epic ski from JBK, we are also offering a 30 minute introductory on water clinic for anyone new to the sport.

What our clients say…

“We went out as a large group on 5 paddleboards and 3 double kayaks. The staff were very friendly and helpful. All of us enjoyed being on the water. Even on an overcast day it's still beautiful. I highly recommend visiting Huskisson and getting out on the water. I'll definitely be back.”

“Great tour guide, great time on the water. An enjoyable time for kids and adults alike. Definitely worth it”

“Hired Stand-up Paddle boards for myself, my wife and teenage son for a standard 2 hour period. Equipment and staff were excellent. The bay, as always, was sublime. When we return in January, this will be back on our to do list for a repeat adventure.”